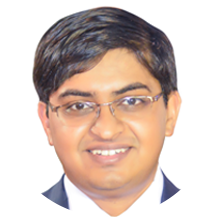 
Kimo is the chief conductor of the Lucid Symphony. A master of many talents with research work stretching from domains as far apart as fracture mechanics, metal forming and ultrasound physics. The geographical spread of his research includes the IITs at Roorkee and Madras and the Fraunhofer Institute for Nondestructive Testing (IZFP). The uber geek is a co-inventor of the Sampling Phased Array technology and holds global patents in NDT Physics and software with researchers at IZFP and other customers of Lucid. Future ambitions include becoming a deep sea diver.


Madhu complements Kimo with expertise in sales and marketing. Madhu’s brief is to bring the software revolution in NDT into the open. Madhu brings diverse experience of selling trucks in the villages of AP all the way to selling telecom software in the little towns of Belgium. Madhu’s education was alongside the country’s finest at IIT Madras and IIM Bangalore. Madhu had visions of becoming a patron of classical music like the aristocrats of yore.


KK is the epitome of the software geek with a hard nose for perfection. KK is one of the chief architects of Kovid. His code reviews evoke awe and fear in equal measure among new recruits at Lucid which is always a surprise to him. The mild mannered KK is the chief scourge of poor code. The toughest tasks gravitate to him and those that work with him are automatically stamped for great geekdom.


Shash represents the XBOX generation at Kovid that has grown up with computers. An avid quizzer Shash is a veritable fount of trivia and has wide interests ranging from fundamentals of physics to science fiction. He is the go to man for developing new algorithms and visualization, at the very heart of Lucid’s NDT software revolution.